Maxentius realized, between 306 and 312 d.c., in one complex: his residence, a circus for the games, and the family mausoleum, which, however, enjoyed no long, before being finally defeated by Constantine.

The MAUSOLEUM takes the named by the son of the Emperor Maxentius, who died in 309 d.c. at the age of seven years and later deified. The mausoleum was a tomb for the imperial family. 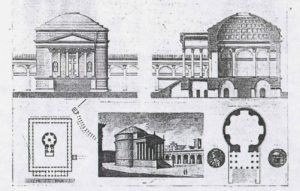 The mausoleum was a two floors building, with the form of the temple, like a small Pantheon: covered by a dome and preceded by a colonnade. Downstairs there was a crypt for coffins, a circular room with a central pillar. Upstairs, now lost, was the cell to the deified emperor worship.

The top of the mausoleum has almost completely disappeared. Here he was celebrated publicly the son of Maxentius became “Divo” after his death. The Assumption derived from the ancient myth of Smele. Greek Goddess Moon, mortal woman and mother of Dionysus, as the deification of the woman taken to Olympus to enter as a Goddess to be part of the Gods.

THE TOMB WAS COVERED BY A LARGE DOME, BUT TODAY it has remained a paved terrace in modern cobblestones. Christians tended to remove, demolish or despoil every Roman monument as pagan and demonic. 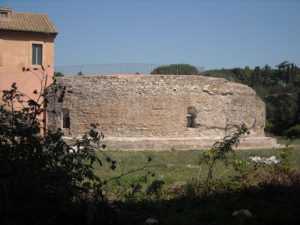 The PALACE was on a domination position on the Appia Street. Maxentius designed a unitary complex which included the palace, the circus and the mausoleum, instruments of his power and of his enjoyment. 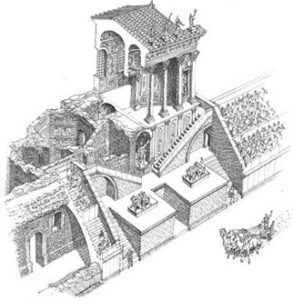 The imperial villa, is the building less preserved than the other two areas. It was placed on a hillock equipped with a terrace supported by a cryptoporticus.

From the Palace, it was enjoying the sight of the circus, place instead a slight natural sinking, as well as the tomb of the imperial family with the entrance facing the Appia, the city’s cemeteries.

The original villa was a large cryptoporticus dates back to the first century. a.c.. The two nymphs reticulated overlooking the Via Appia, was built in age Julio-Claudian. At the highest point of the hill a large tank supplied water to the inhabitants of the complex.

In the second century a.c. Herodes Atticus, owner of the area, renovating the villa, he built the two groups of visible circles on the sides of the later “Aula Palatine” and the spa complex, including three pools marble coated are still visible today.

Imperial building remain standing only the apses of three large rooms. Of these the plant is identified as the Temple of Venus and Cupid, the most important room of the building as “Aula Palatine” or room of imperial audiences.

The CIRCUS OF MAXENTIUS, was a private area, smaller than pubblic place like Circus Maximus, infact the first can had 10.000 People, while the second can had 150.000 people. 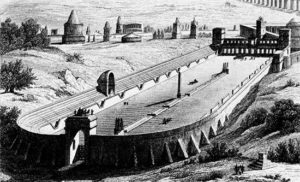 Everything suggests that this emperor did not love the splendor of the Roman court, so as several other emperors, he preferred to isolate themselves outside Rome, however, surrounding himself with all the luxuries due to his status.

Therefore it could not miss the circus where they were organized shows for the imperial family and the court that he lived here.

The Circus of Maxentius, built in 311 d.c. and incorrectly referred to in the Middle Ages the circus of Caracalla, in fact, was not public, but reserved for the emperor’s person and his residence.